“Yes. We took too much damage. Can’t go much further.”

The Princess leans towards you to get a better look at the map, her hair brushing your cheek. She points a slender finger towards a planet marked on its display.

Words of assurance rise up your throat, but you swallow them. You can’t lie to her.

She nods, and buckles herself into her seat. Her hand clasps your arm. It’s trembling.

The ship’s systems scream in protest as you direct the dying machine towards the planet. Soon Gallea looms up ahead of you, and you hear a gasp of relief from the Princess. But she isn’t a pilot. She doesn’t realize that the hard bit is yet to come… 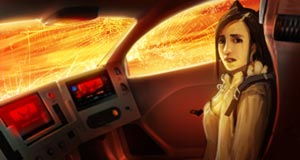 The ship slices through the atmosphere, shrouded in flame as the air burns around you. Again and again the warning lights flash and alarms blare, like obnoxious heralds of doom.

The controls struggle in your grasp, as if the ship itself is fighting you, betraying you. The Princess’ grip tightens on your arm. If you can just land... 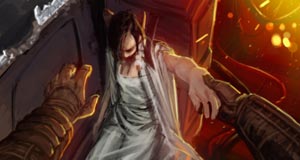 Your mind whirls. Everything’s spinning. You say something, but the words seem slow, like they’re moving through water.

Then your vision begins to clear, focusing on the white mass next to you until it becomes Princess Illaria. For a second she’s motionless, lifeless. Then she gives a faint groan, and the breath returns to your throat. The ship screeches around you as it dies, bleeding sparks and fire.

In the back, one of the guardsmen is still, a spur of metal through his neck. The other is spluttering, droplets of blood flying from his mouth to punctuate his coughs. He’s dragging at one of his legs, trying to free it from a twisted mass of metal.

He looks up, and his eyes meet yours.

You grab hold of the Princess, pulling her limp form out of the seat. You have to get her to safety...

No Rest From The Wicked 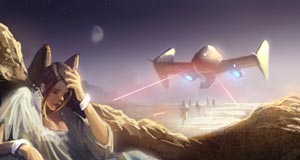 You sprint across the hard ground, the Princess in your arms. Each step jolts your battered body, but you force yourself on. There are large rocks ahead of you. They should provide some cover…

You clamber over the rocks, laying Princess Illaria down behind them. You lie beside her as the explosion fills the air, and watch as a shard of metal flies overhead, landing with a clatter a few yards away.

There’s movement nearby, and you reach for your weapon. But it’s Talia, her bright eyes gleaming in the glow.

“Made it…” mumbles the Princess, as she moves into a sitting position, one hand pressed against her head.

There’s roar from overhead. You get to your feet, and look over the rocks to see the big, bloated body of a Centurian troop carrier as it descends towards the ground, near Talia’s ship. Soldiers are already leaping from its deployment hatch. One of them spots you, and begins firing in your direction. A moment later the others follow suit.

You raise your weapon, and return fire.

Get Off My Planet! 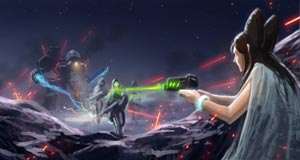 The Princess gets to her feet, leans against the rock, and opens fire. Talia blasts away with a pistol in each hand, and every shot – wild as they seem – finds its mark. Centurian soldiers collapse on the rocky ground, but more keep pouring out of the transport ship.

A deep, slightly robotic voice rings out across the battlefield, loud enough to be heard over the shouts, screams, and laser fire.

“Hey! You think you can come to my planet and start shooting up the place?” it says.

A large robot appears from the left, emerging into the dawning light. Lightning flashes from a weapon mounted on its arm, and strikes a Centurian soldier – sending him flying through the air. Then it charges towards the other Centurians, slashing at them with what appears to be a big, laser-edged chainsaw. Several of the soldiers turn to fire at the robot, their lasers pattering against its armor.

“A battle bot?” asks Talia. “I thought only TALOS had those?”

“Worry about that later,” you reply. “Just pick off the Centurians, while they’re distracted.”

The robot raises its arms in the air as the last Centurian falls. Then its legs begin to hop up and down. If you didn’t know better, you’d think it was engaged in some kind of victory dance… Again that deep, computerized voice sounds from speakers which must be mounted on it somewhere.

Then the robot stops in mid dance, its arms and raised leg freezing in place as it catches sight of you.

The robot begins lumbering towards you.

“That’s not good…” you mutter.

“He called it ‘his planet’,” says the Princess. “He must be King Salastro’s robot. If we can just reason with him, ask him to take us to the king…”

“Sure… let’s reason with the killer robot,” says Talia. She twirls her pistols. “I’ll put forward my two best arguments.”

The ‘robot’ draws closer, and in the growing light you see that it’s not a robot at all. There’s a small cockpit on top, and inside it there’s… a small boy?

“Hey! Don’t call me-” This time the voice is the high-pitched whine of a child. The boy frowns, and presses a button. When he continues, his voice is deep and robotic once more. “-a kid! I’m ten!”

Under the circumstances, you just can’t help yourself. Despite the seriousness of the situation, in spite of all the dangers you’ve faced and have yet to face, you and Talia burst out laughing at the incredulity of it all. The boy scowls.

“That’s it!” he yells, again forgetting to use his voice modulator. “I’m gonna… gonna…” Words seem to fail him in his rage. Instead he charges, swinging his laser-edged chainsaw.

But it’s too late. He’s already on you, and you have to fight.


The kid’s mech collapses, falling onto its butt. The movement is so like that of a child falling whilst taking his first steps that you can’t help but laugh once more. The boy hammers away at the controls, but the mech doesn’t respond. Its arms lie motionless. His look of frustration brings a fresh torrent of laughter from you and Talia. The Princess frowns, and punches you in the arm – a remarkable breach of imperial protocol. But you just can’t help it…

The mech’s cockpit flies open, and the kid leaps down to the ground. He runs over to you, and begins to kick your shin. You lift your leg to kick him back, but the Princess intervenes.

“Stop it! I know you – you’re Prince Telemachus.”

The boy stops kicking you, and looks over to her, curiosity now eclipsing his anger.

“Yeah, that’s right.” He stares at her intently. Then recognition dawns in his eyes. “Hey, you’re the Sian Princess! I’ve seen you on the news network.”

“He’s King Salastro’s boy,” she says, turning to you and Talia. “I haven’t seen him since he was a baby.”

“So that would be what, last week?” asks Talia.

Telemachus looks as if he’s about to leap at her, but Princess Illaria intervenes once more.

She trails off as large shapes appear in the sky. More Centurian ships, coming down towards you.

“We have to get away from here,” you say.